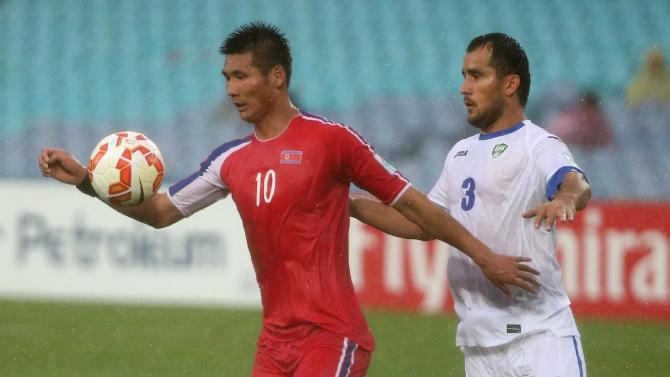 Melbourne: North Korea are approaching Wednesday’s Asian Cup clash with Saudi Arabia confident that a gradual ideological thaw will help them overcome the odds and reach the quarter-finals.

After a 1-0 defeat by Uzbekistan in their opening game at the weekend, coach Jo Tong-sop backed his Swiss-based pair Pak Kwang-ryong and Cha Jong-hyok to spearhead a revival in Melbourne, describing them as crucial to his side’s hopes.

“Yes I rely a lot on them and expect them to step up in the next games,” he told reporters on Tuesday. “They were perhaps a little tired in the first game, but they should be better in the next two matches. If we stick to our plan and play to our strengths we’re capable of winning both games.”

Saudi Arabia, who won the last of their three Asian Cup titles in 1996, were upset 1-0 by China in their Group C opener.

Pak, who moved to Switzerland in 2011 and has played for Basel against Manchester United in the Champions League, did not shirk responsibility when asked about the pressure on North Korea in only their fourth Asian Cup appearance.

“We have to be better,” said the striker. “Since I’ve moved to Switzerland I’ve seen European football with my own eyes. It’s considered better than Asian football and I’ve learnt a lot, which I hope will be helpful to my North Korean teammates.

“When I first went to Europe everything was unfamiliar to me — the style of football, the language. But day by day I got used to life there. I made friends with the players and coaches and they helped me to overcome the language barrier.

“Playing against Manchester United in the Champions League was the best experience of my career, really fantastic.”

North Korean leader Kim Jong-un has led a propaganda drive aimed at transforming the isolated country into a “sports superpower” and frequently bestows tactical advice to athletes and coaches on how best to bring glory to the state.

Pyongyang frequently lavishes cars and apartments on those who produce the goods, but can be equally harsh on those who fail.

According to media reports, the players and coaching staff who flopped at the 2010 World Cup were subjected to a six-hour public inquisition for “betraying” North Korea’s ideological struggle before being punished by being sent to work on a building site.

“The Great Leader was not able to visit the team before we left Pyongyang but he continues to give us valuable instruction,” said Jo. “We are grateful to feel his great love, which gives us power, and hope to repay him by winning the tournament.”

“Things didn’t go to plan in our first game,” added Jo, deputising for Yun Jong-su, who is serving a one-year ban for a bellicose tirade at officials after North Korea’s loss to South Korea in the Asian Games final last October. “But we can still win our next two games.”