The DPRK contingent that participated in the 17th Asian Games arrived in Pyongyang by air on October 5.
The delegation of the DPRK Olympic Committee came home together.
The games ran between September 19 and October 4, drawing some 14 500 sportspersons from 45 countries and regions in Asia.
The Korean athletes competed in weightlifting, table tennis, wrestling, artistic gymnastics, shooting and some other events, winning 36 medals including 11 golds.
In particular, the female soccer players scored 16 goals and beat all opponents including the defending world champion, Japan, claiming the title and rising to fame again as big-name soccer players.

At the airport, they were warmly greeted by Hyon Yong Chol, Kim Ki Nam, Choe Thae Bok and other senior Party, state and military officials, generals of the Korean People’s Army, chairpersons of sports associations, leading officials of their support organizations and officials concerned.
Sportspersons, working people and their families garlanded the gold medalists and presented bouquets to them.
The contingent visited the large portraits of beaming President Kim Il Sung and Chairman Kim Jong Il and bowed with profound reverence to them who had performed brilliant exploits for the Juche-based sports development.

Crowds of people chanted “Welcome”, “Congratulations” and “Bravo”, waving bouquets to the players.
Pyongyang was enveloped in a festive mood to welcome the triumphant return of the heroes.
Placards and streamers reading “Warm welcome to athletes who added glory to the nation at the 17th Asian Games!” and “Congratulations to our proud sons and daughters who exalted the national honour with gold medals!” and the three-colour flags of the DPRK were seen along more than a dozen kilometre route from the entrance to Ryonmot-dong to Ryonghung Rotary and Kaesonmun, Changjon and Chollima streets.
Hundreds of thousands of citizens took to streets with the flags of the DPRK and bouquets in hands and sang and danced to give a warm welcome to the proud sons and daughters.
As the motorcade preceded by large open decorated vehicles carrying the female footballers arrived at the entrance to Ryonmot-dong, the crowds on both sides of the street burst into cheers of “Bravo”, “Welcome” and “Congratulations”, waving bouquets.
The welcoming music of the women’s brass band of the Korean People’s Internal Security Forces resounded in the street.
Recalling the fierce competitions they played with patriotic mind shared with all the service personnel and people of the country, the football champions heartily waved back to the cheering crowds. The enthusiastic cheers got louder as they saw Om Yun Chol, Kim Un Guk, Kim Un Ju and Ri Jong Hwa who shook again the Asian weightlifting and became world aces, Jong Hak Jin, Jang Un Hui, Hong Un Jong and Kim Ji Song, titleholders in wrestling, boxing, artistic gymnastics and shooting, and Kim Hyok Bong and Kim Jong, 2013 world table tennis mixed doubles champions, who topped the same event in the games.
The enthusiastic welcome climaxed with performances of fantastic fan and janggo dances and enthralling acrobatic show given by artistes at Kim Il Sung Square.
Artistes, students and young people put garlands on the winners, presenting them with bouquets.
They were so excited that they called for holding them up in the air and hugged them, singing and dancing in great joy.
Through the waves of flowers, the motorcade proceeded to other streets.
“The scoring scenes are still vivid in my memory. Our players are great. They have won Asian Games title this time, but next time they will become world champions, I believe. I am determined to work harder to push back the frontiers of science and technology in the same spirit as they displayed to fulfil my duty as a youth of Songun Korea,” said Kim Tae Song, student at Kim Il Sung University Pyongyang Medical College who joined the cheering crowd to congratulate the proud titleholders. 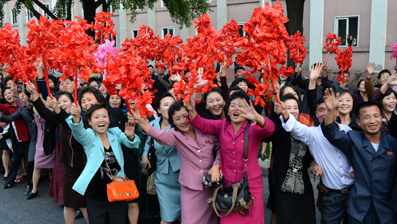 Leaving behind the welcoming citizens, they climbed up Mansu Hill to lay a basket of flowers and bouquets at the statues of the President and the Chairman and made a bow to them with the humblest reverence for them.
That day sportspersons and coaches who returned home from the 17th Asian Games held a news conference at the Pyongyang Indoor Stadium.
Kim Pyong Sik, vice-minister of Physical Culture and Sports who headed the contingent, referred to the scale of the games and achievements of his players.
He was followed by athletes and coaches, who said in unison that the love and trust shown by supreme leader Kim Jong Un gave them courage and grit and expressed their resolve to train harder to win more gold medals in informational matches, thereby positively contributing to demonstrating the dignity and might of Kim Il Sung nation and Kim Jong Il’s Korea.
By Song Yong Sok PT