It is a little over two years since the Pyongyang International Football School opened in Korea. Here we can have a bright view of the future football players.

Instructors in this school were once famous on international scenes. For example, O Kum Hui belonged to the team who won the 3rd U-20 Women’s World Cup held in Russia in 2006. She is a Labour Heroine and a People’s Athlete. She says, “We teach pupils not only basic theory on football combined with practice but also mathematics, physics, chemistry and other subjects. All the subjects are associated with football. I am proud of being one of the first instructors of the Pyongyang International Football School, and I’m going to devote myself to the work of training football stars known not only to our country but also to the world.” 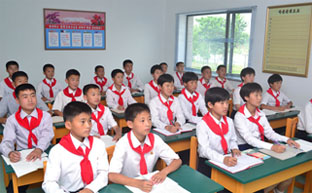 Kim Jin Hyok in a junior middle class says, “The State found something about football in me and sent me to this wonderful school, the only school of this kind in our country. We know the intention of the Workers’ Party of Korea to make our country a sports power and a football nation. I will do my best to take the lead in study and training. Maybe, my friends have the same idea as me.”

The pupils participated in the 3rd International Codian Cup held in Haimen City, Jiangsu Province, China, in March 2014, a year after it opened. T

he Democratic People’s Republic of Korea, China, Thailand, Japan and south Korea participated and they played league matches. The victory and defeat were concluded by the total number of scores.

The DPRK team had no experience in international games, so those matches were really hard for them. Coaches Kang Myong Chol and Ri Yu Il firmly trusted players, and they mapped out an innovative tactical plan and applied it to the match. The players did their best with well-organized defence, attack and counter-attack. Finally they won first place by increasing the score through thrusts into the goal area by fast break, and man-to-man passing.

They won first place again in the 4th International Codian Cup held in April 2015. In the two contests they were given two best coach awards, two best player awards, two greatest scorer awards and a best goal keeper award. An Phyong Il received the greatest scorer award for his 20 goals, and was seen as a promising player by the organizers and spectators of the tournament.