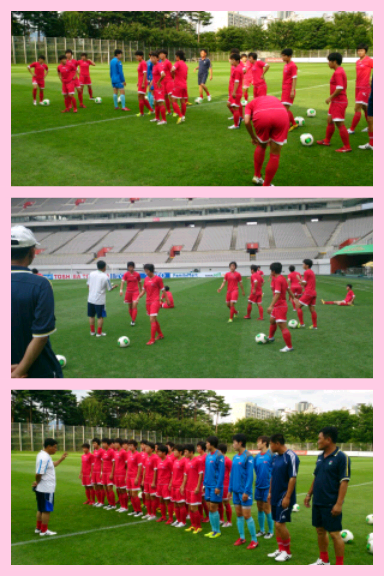 SEOUL, July 18 (Reuters) – The North Korean women’s soccer team arrives in Seoul for a regional tournament on Thursday just months after missile tests and threats of nuclear war pushed the peninsula close to conflict, and while some see the visit as a sign of easing tensions few are putting any faith in sports diplomacy.

The tournament takes place with the two Koreas engaged in rare talks aimed at restarting a jointly run industrial project in Kaesong, which closed in April as relations between Seoul and Pyongyang plummeted.

The closure of the park, a money-spinner for the impoverished North, came after North Korea threatened strikes with nuclear and other missiles against the South and the United States after the United Nations imposed toughened sanctions on the North for its third nuclear test in February.

While most other aspects of cross-border cooperation have been frozen, sport seems to be one area in which the North has found some common ground with its neighbour.

Jeon Young-sun, professor at the Institute of the Humanities for Unification from Konkuk University, said some significance could be attached to the visit of the women’s team but the relationship had to improve before progress could be made.

“It (the visit) can be considered meaningful but in the middle of a lull in South-North Korea relations, politics are likely to impact sports, not the other way,” Jeon told Reuters.

Sporting relations between the two Koreas have veered from cosy to ice cool in recent years, the high point being their joint march under a ‘unification flag’ at the 2000 Olympic Games in Sydney.

The two Koreas also fielded a joint team for the 1991 World Table Tennis Championships but examples of such rapprochement are rare.

At last year’s London Olympics, the North Korean women’s soccer team walked off the pitch in disgust after the South Korea flag was incorrectly displayed on a giant screen at Glasgow’s Hampden Park stadium.

The game was delayed for over an hour after images of the North Korea players were displayed beside the South Korea flag and London Olympics organisers had to issue an apology.

Soccer has been a familiar battleground for political tensions to be played out.

The North did not even attempt to qualify for the 2002 World Cup, which was being co-hosted by South Korea and Japan, while matches between the two teams during 2010 World Cup qualifiers were a constant headache for the game’s governing body FIFA.

Games scheduled for Pyongyang had to be moved to Shanghai after the North refused to allow the South Korean national anthem to be played in Kim Il-sung Stadium, or for the South’s flag to be flown.

Kwak Moon-wan, the head of a North Korean defectors’ football club in Seoul, said there was little hope that sport could be used as a vehicle to close the ideological gap.

“It would be very significant if North Korea were to let South Koreans play on its soil and let them fly their flag and play their national anthem,” said Kwak, who fled the North and settled in Seoul in 2003.

“But until that happens, sports can’t be used for diplomacy between here and there.”

While some have expressed hope that the two Olympic teams could march together when the Winter Games come to South Korea’s Pyeongchang in 2018, a Korean Olympic Committee official told Reuters that possibility remained a distant one.

“This is the first time North Korean athletes are visiting South Korea since inter-Korean relations went sour earlier this year, but unfortunately there is nothing going on as to forming a joint team or marching together at an international competition,” he said.

“In order for that to happen, we first need to have a bond of sympathy or a feeling of brotherhood but given the current political standoff, it is unlikely.”

The women’s East Asian Cup wraps up on July 27. A men’s tournament is being held at the same time but North Korea did not qualify for the finals.

SEOUL, July 18 (Yonhap) — A cheering group from Japan will start entering South Korea on Thursday to root for the North Korean women’s national female football team that is scheduled to play in a continental tournament here, the foreign ministry said Thursday.

A total of 33 Koreans living in Japan will enter the country from Thursday to Tuesday to join the squad organized to cheer for North Korea in the July 20-28 East Asian Cup tournament, according to the Ministry of Foreign Affairs.