All women want their children to perform great feats for the country. They find happiness and pleasure there.
Jang Yong Sil is the mother of Ra Un Sim, captain of the Korean team which came first in the women´s football match of the 17th Asian Games. Ra Un Sim was awarded the title of Labor Hero of the Democratic People´s Republic of Korea in October last.
Her mother Jang Yong Sil says:
“I can´t believe that my daughter Un Sim is heroine. I had never dreamed of it when she was learning football. I shed tears of joy on the day when the decree on awarding the title of Labor Hero to my daughter was issued. It is the greatest happiness to me as her mother.”
Jang Yong Sil has three daughters. Ra Un Sim is demonstrating the honour of the country through football. And two other daughters are demobbed officers who served in the army for national defence. Jang Yong Sil had planned to let her three daughters learn how to play the accordion. But she changed her mind when she was told that Un Sim was selected to football class after entering primary school.
One day she happened to read the diary of Un Sim with her determination to become a famous footballer and bag a gold medal. It was the thought of a little child, but she did not miss it. She thought that she, as mother, ought to help her daughter to realize her decision. But she was worried about her poor health.
Jang Yong Sil was concerned for her daughter to make physical preparations as footballer, cooking more dishes suited to her taste and making various tonics. Sometimes she pitied her daughter who was always tired, but let her unconditionally carry out the daily training plan. She made time to read lots of books on football for her daughter and when a game was held, she went to watch it and congratulated and scolded her. So Un Sim was summoned to a professional sports team through the football class of the primary school and the football group of the district juvenile sports school.
Ra Un Sim began to participate in international games from Juche 94 or 2005. In Juche 96 or 2007 she received three prizes–Prize of Most Valuable Player and Prize of Leading Goal Scorer of the Asian Youth Women´s Football Championship and the Asian Football Confederation Prize for the Best Young Woman Player of the Year.
Ra Un Sim fully displayed her ability at the 17th Asian Games as well. A good mother raises a good child. Seeing Heroine Ra Un Sim today, people unanimously praise the unknown efforts of her mother Jang Yong Sil.
Jang Yong Sil says:
“People envy me, saying I have a praiseworthy daughter. I only gave birth to her. The state found out the talent of my daughter even her mother had not noticed and brought her up systematically and today she has become a heroine. Under the good system, my daughter has become a famous footballer. And I am the happiest mother. I have nothing to want. I only think to support my daughter well so that she can live as befitting heroine.”
With such mind she is still encouraging her daughter shedding sweat with training. 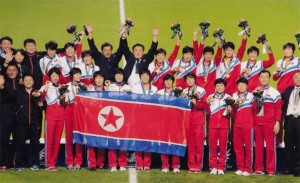 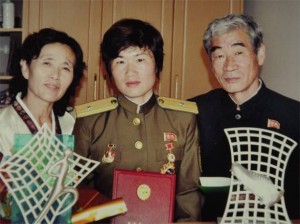 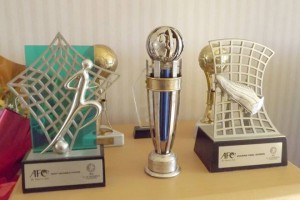 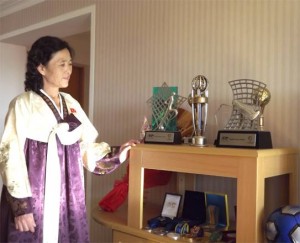 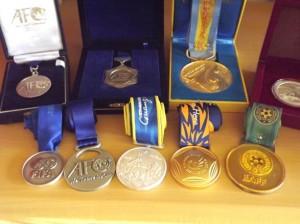 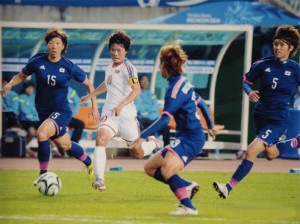