PYONGYANG, Aug. 26 (Yonhap) – North Korea has long stressed sports as a means to raise its international stature, and that’s the spirit in which Pyongyang International Football School (PIFS), for kids aged 7-14, opened in 2013.

The goal is to foster football players who will represent North Korea in 10 years, says Hyon Chol-yun, who heads the school in the North Korean capital.

It has made strides in recent years. In 2014, North Korea stunned the South with its national youth football team beating South Korea 2-1 at the AFC U-16 Championship final. With two of its players part of FC Barcelona, South Korea had predicted an easy victory.

The North Korean football training system works on a survival-based methodology in which those who fail to keep up are pruned annually, Hyon told Yonhap News Agency when the school was opened to South Korean media for the first time last week. Yonhap was one of two media outlets there.

Students at PIFS learn regular subjects in addition to North Korean ideologies — a must in every school. Football theories are taught in English to prepare them for overseas recruitment, which occurs every year. This year, Italy’s Perugia will visit to take their pick.

Like any other team, the North Koreans strive to mimic the Spanish style of “tiki-taka,” characterized by its quick movements and passes, and the stalwart defense of the Germans. As such, students are evaluated based not just on their physical merits, but also on intelligence and aggressiveness, Hyon said. 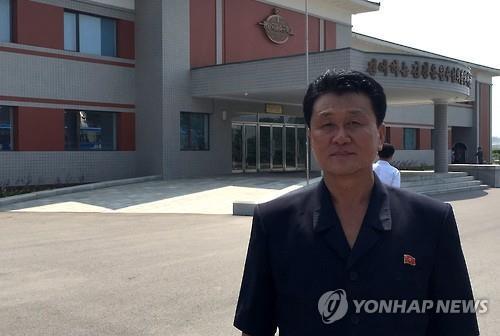 Hyon Chol-yun poses for a photo in front of the Pyongyang International Football School of which he is the principal on Aug. 17, 2015. (Yonhap)

“I tell them to always use their brain no matter the situation,” he said, “because once the game starts, there’s only so much a coach can do. The 11 players must come up with their own solution at times of crisis.”

It’s a hard-learned lesson from the past, when North Korea used to focus only on the cohesiveness and stamina of the team at the expense of creativity.

The school’s size has nearly doubled from 80 students in its inaugural class to 160 students now.

“‘Football that thinks’ is the new wave of North Korean football,” Hyon said. “Pyongyang International Football School will build on that wave and strive to stay at its forefront.”