PYONGYANG, Aug. 21 (Yonhap) — About 24 hours after the two Koreas exchanged fire across their heavily fortified border, South Korean footballers participating in an international youth tournament in Pyongyang on Friday were seemingly oblivious to the tension.

The second edition under-15 competition kicked off Friday in the North Korean capital, a day after the exchange of artillery fire between the Koreas. South Korea is represented by two teams: one from Gyeonggi Province and another from southern Gangwon Province. They are up against two squads from North Korea and teams from China, Uzbekistan, Croatia and Brazil. The tournament will close on Monday.

The South Koreans were informed of Thursday’s clash on Friday morning. Yet when the Gyeonggi Province squad defeated the Chinese team from Kunming 3-0 at Rungrado May Day Stadium in Pyongyang, any lingering tension among the young players seemed to have dissipated.

And it didn’t hurt that most of the 70,000 fans were behind the South Koreans.

Kang Min-seung, who scored the first goal of the match, said it was “an honor” to get his team on board first at “an important competition.”

“And when I scored, the cheers were so loud that I got goosebumps,” Kang added.

Lim Jae-hyeok, captain for the Gyeonggi Province team, said he and the players are doing just fine and that their parents shouldn’t worry about them.

“We’ll come home with the championship,” Lim said with a smile. 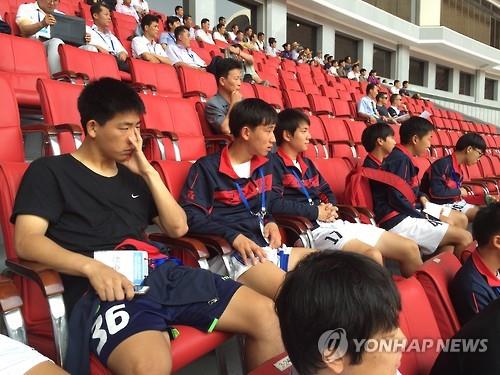 South Korean players participating at an international youth football tournament in Pyongyang watch a match between April 25 Sports Club of North Korea and Atletico Sorocaba of Brazil at Rungrado May Day Stadium on Aug. 21, 2015. (Yonhap)

The South Korean players, officials and provincial representatives attended a reception hosted by the North Korean organizers Thursday evening, even as the tension continued to rise on the peninsula.

At the dinner, Hyon Chol-yun, principal of the Pyongyang International Football School, said he hoped the players from all countries would “have a good time” during the second edition of competition. Kim Gyeong-sung, the South Korean head of the Inter-Korean Athletic Exchange Association, responded, “We hope to host the third competition in South Korea and to be able to play at this tournament every year.”

Earlier Friday, Gyeonggi provincial officials said they phoned the parents of every Gyeonggi player currently in Pyongyang to assure them of their children’s safety.

“We felt the parents would be really worried about their children, and we decided to speak to them to put their mind at ease,” one Gyeonggi official said. “Surprisingly, most of the parents were quite calm and collected.”