The AFC Presidents cup has reached its finals of the final episode of the tournament and the winner will take home the prestigious AFC PRESIDENTS CUP home.
FC HITTU of Turkmenistan who only needed a draw to advance for finals manged to beat Sri Lanka Air Force in thriller by 2 goals to 1 to reach the targets and will meet much fancied North Korean Club Rimyongsu Club.in the finals.
The finals will kick off at 4.00 pm at the Sugathadasa Stadium on Friday 26th September which will be followed up by the Awards ceremony.
In the first Semi finals Rimyousy Club North Korea beat Sheikh Russels Krira of Bangladeah by 4 goals to 0. North Korean team plays a well combine and technical football which will be a challenge or the HTTU team.
The HITTU club of Turkministhan had a tough game against hosts Sri Lankan Air Force and beat them 2-1 at the final whistle.
It was Air Force who scored in the first 21st minute through their main stricker Kavindu Ishan to have the lead 1-0 at lemons. They led the HTTU till 80th minute and let the game turned towards HITTU win with 2 goals coming from their main sticker Sulayman Muhadev . He scored a hatrick at the opening game against Nepalese Manang to make his goals tally to 5.
The fast and strong HITU played a good game with out luck and Sri Lankan goal keeper Sujan Perera excelled in between the posts to save 3 – 4 certain goal scoring chances .
THE GRAND FINALS
HITTU -Turkminsthan Vs Rimyongsu Club North Korea
IN White – HITTU – Turkministhan Team and in Blue Rimyongsu Club North Korea 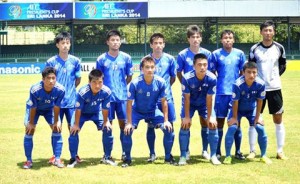 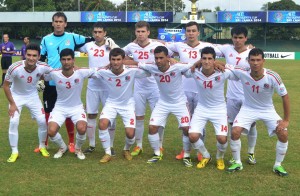