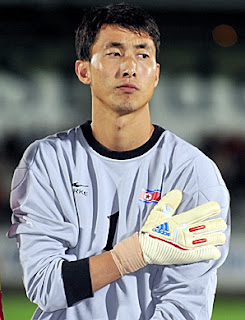 IT’S the case of the disappearing footballers – an entire squad enveloped in as much mystery as you might expect when they hail from the world’s most repressive regime.

North Korea’s football team will arrive in Sydney ahead of the Asian Cup early next week – but so far every part of their planned whereabouts has been treated appropriately like a state secret.

Where the other 15 competing nations have notified organisers and media of their training venues and pre-tournament friendlies, North Korea will apparently arrive and simply hide away until their opening game against Uzbekistan at ANZ Stadium on January 10.

The team is currently training in the Chinese province of Hainan, before heading to Sydney to finish their preparations.

It may not be a surprise, given the iron secrecy with which North Korea treats all of their affairs, and officials at the Asian Football Confederation say the Communist state’s football team simply ignores many strictures that relate to openness and media access.

How easy it will be to hideaway once the team is here remains to be seen, but then this is hardly a side not used to controversy.

Head coach Yun Jong Su is serving a one-year ban by the AFC for apparently abusing match officials after his side lost the Asian Games final to hated rivals South Korea two months ago.

Brilliantly though Su will be allowed to register as a team official and still conduct training sessions – just not coach the team on match days – though his predecessor Jo Tong-sop has been registered with the AFC as “head coach”.

It will also be interesting to see the support the team gets in that first game, after rows of “fans” in suspiciously identical garb at the 2010 World Cup were revealed to be hand-picked Chinese supporters there to support their “Communist cousins”.

In their meeting before signing the agreement, Liu spoke highly of the important role of sports exchanges in consolidating and developing traditional China-North Korea friendly relationship and extended congratulations on extraordinary achievement made by the Korean athletes in international competitions in 2014, reports Xinhua.

Liu also voiced hope that sports departments of both China and DPRK can strengthen exchange and cooperation in the upcoming new year and elevate the level of competitive sports and mass sports campaigns in both countries, so as to make new contributions to cementing and advancing traditional China-North Korea friendship.

Son on his part said that enhancing sports exchange and cooperation with China is a major task of the North Korea’s sports departments.

Collaboration between sports departments of the two countries and support for each other will push North Korea-China relations to keep moving forward, he said.

In addition, both sides reached consensus on 19 training and exchange programs aimed at encouraging and promoting cooperation between China’s three northeastern provinces and the North Korea’s sports associations.