Sydney: North Korea defended their selection of a suspended player and dodged questioning about their coach`s one-year ban on Friday as they prepared to open their Asian Cup campaign against Uzbekistan.

At a press conference, North Korean translator replied “What do you mean?” to a query about suspended coach Yun Jong-Su, before the question was given the red card by the moderator.

The Asian Football Confederation (AFC) banned Yun for a year over his angry rant following North Korea`s narrow loss to South Korea in the Asian Games final in October.

Caretaker coach Jo Tong-Sop said Jong was injured, and added Ri would benefit from the trip despite not playing — and would be fresh if North Korea qualify for the knock-outs.

“He`s a good player. He cannot participate in the three matches in the group stage, I know that very well,” said Jo.

“This will be a very good chance for him to learn how fair play is important for a player. And if he has a good rest he can be used in the next stage of the Asian Cup.”

North Korea face a difficult first outing on Saturday against Uzbekistan, the 2011 semi-finalists who were one win away from a World Cup play-off last year.

The team from the isolated communist state have not played a friendly since November but Jo said he preferred to work on team unity rather than warm-up matches.

“Training matches would help the team to get ready for the tournament, it`s true but rather than playing a lot of friendly matches, I concentrated on uniting our team and preparing our team,” he said.

Jo added: “Any player who is mentally ready and able to concentrate all his spirit and all his ability to his play, he can score.”
AFP

The 55-year-old, who is on his second stint as head coach after replacing the suspended Yun Jong Su, praised his team’s Saturday opponents.

“Uzbekistan are very strong; they’re good enough to make tomorrow a competitive match,” Jo said during his press conference at the Stadium Australia in Sydney. “We know a little about them and have made our plan; tomorrow we’ll see if it works.

“We’ve been preparing for this for a long time. If we have a good result from this tournament, it would please the whole nation.

The coach was rapidly put on the spot by media in attendance, with the first question an inquiry regarding Suwon Bluewings striker Jong Tae Se’s absence from the squad.

“His condition is not very good,” Jo answered, “he has a leg injury and we did not have enough time to call him up.”

He also dodged a question about a hypothetical North-South face-off in the quarterfinals, saying, “If we prepare well for each match then we can beat any team, whether that’s South Korea or anybody else.”

Jo was joined at the podium by goalkeeper Ri Myong Guk, the team’s goalkeeper and team captain.

“Each and every team has come here to win the competition and so have we,” said Ri, who appeared in the 2010 World Cup, “We know it won’t be easy but we’ll do our best.

“In one sentence I’ll say that it’s our wish to win, which would bring pleasure to General Kim Jong Un and the people in our country. That is what we want.”

After Saturday’s campaign-opener, North Korea will travel south to play Saudi Arabia in Melbourne before facing neighbours China in Canberra. 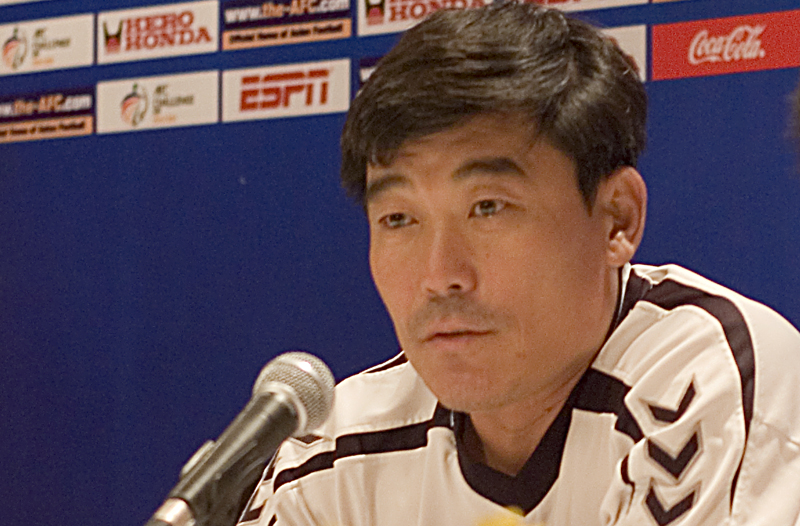 As the man that guided DPR Korea to the AFC Asian Cup Qatar 2011™ through their victory in the 2010 AFC Challenge Cup is was only fitting that Jo Tong-sop took charge for the continental finals, having masterminded the Chollima’s success in Sri Lanka.

Jo has clocked up considerable experience coaching his country’s various national teams, with the 51-year-old having recently took the under 23s to the quarter-finals of the Asian Games shortly after working as an assistant to Kim Jong-hun at the 2010 FIFA World Cup a few months earlier, in addition to guiding the under 19s to the AFC Youth Championship title in 2006.

A former international who was part of the DPR Korea squad that defeated Danish side AGF Aarhus 2-1 to win the 17th edition of the Thailand King’s Cup, Jo playing career spanned almost two decades, spending 14 years with Potonggang before moving onto Munsubong.

DPR Korea will battle it out with defending champions Iraq, Iran and the UAE in the continental showpiece.