As a midfielder, the girl scored two goals out of 11 goals in the first group league match against Gambia. She also provided a wave of scoring chances through her tactful passes in group league matches and quarterfinals.

“Quick in actions, Ri Hyang Sim is good at judgment and pass in goal area. Backed by her, Ri Un Sim rose to be a top scorer with eight goals at the world cup.”

Ri Hyang Sim, a native of Pyongyang, started her career as a footballer at the age of 12 at a secondary school’s sports group.

She distinguished herself at the 2011 Asian U-16 Women’s Soccer Championship.

“It is very regretful that the DPRK became the runner-up at the world cup.

I will do my best to make the DPRK win titles in future tournaments.” 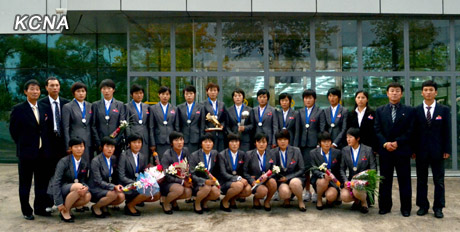 “Korea’s reputation goes before them in this competition,” said Guy Ferrier before his France side tackled Korea DPR in Group B on Tuesday. “They’re a very disciplined team who play good football and we’ll need to be wary of them.”

As it turned out, he was right to be concerned. Les Bleuettes narrowly avoided a football lesson as they scraped through to earn a 1-1 draw, and by the end of their game their respect for their opponents was enhanced. Once again, the Asian side have come to a FIFA U-17 Women’s World Cup in impressive shape.

“A lot of work has gone into the development of women’s football in our country,” the team’s coach Hwang Yong-Bong told FIFA.com by way of an explanation. “The education system in our football schools is excellent, and you can’t help but notice that that is bearing fruit. We regularly come away with good results in the FIFA U-17 Women’s World Cup.”

The same could be said of Asia in general as the continent has held a strong grip on the competition since the North Koreans won the maiden title at New Zealand 2008. Two years later, Korea Republic followed in their neighbours’ footsteps at Trinidad & Tobago 2010, where three of the four semi-finalists hailed from the Far East.

“In Asia, women’s football is still growing in popularity every year,” added Hwang. “That creates a certain competitiveness and explains why the sport is in such good health back home.”

True to form, the challengers from the Far East are turning heads again at Azerbaijan 2012. All the Asian teams won their opening games and they all remain unbeaten after the second round of matches – both feats setting them apart from every other confederation.

Korea DPR feel they should have done better against France as well. Solid at the back and highly disciplined overall, they came tantalisingly close to posting another victory. “We made too many mistakes to win that match,” said Hwang. “My players are young and lack maturity, but at least they gave everything.”

Mental strength
The Young Chollima are certainly not in the habit of throwing in the towel. Kadidiatou Diani’s equaliser for France was the fastest in FIFA U-17 Women’s World Cup history, coming just 80 seconds after Korea DPR had gone ahead, but Hwang’s troops quickly recovered from the blow, dusted themselves down and went looking for the win. They launched wave after wave of attack on Romane Bruneau’s goal and fell narrowly short of making the difference, despite the best efforts of four-goal Ri Un-Sim, three-goal Ri Kyong-Hyang and two-goal Ri Hyang-Sim.

“Whatever happens, our mental strength will remain our number one asset,” said Hwang, who knows that his players will need all that strength in abundance if they are to lift the trophy. “The 16 teams in the tournament are here to win, ourselves as much as anyone. We’re going to fight right up until the end. Ultimately, it will be heart which makes the difference in this tournament. You don’t get to win just because you’re favourites. We want the title.”

To keep that dream alive, the North Koreans now need to obtain a positive result against one of the most fancied sides in the competition, with their final group game pitting them against USA in Baku on Saturday. “They’re a very strong team, but I’m staying optimistic,” said Hwang. “I’m convinced that my players will put in a better performance than against France.”

Given that Korea DPR went on to clinch the title after their last meeting with USA at this level – a 2-1 triumph in 2008 – he may also be hoping for an omen.