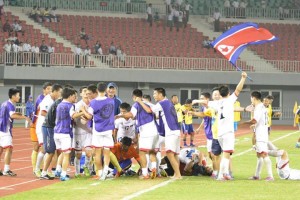 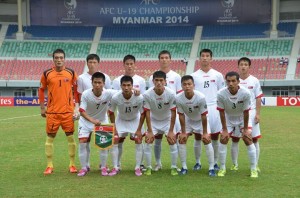 DPR Korea advanced to the semi-finals of the AFC U-19 Championship after edging out Japan 5-4 on penalties following a 1-1 draw in Friday’s quarter-final at Wunna Theikdi Stadium.

With chances at a premium during a hard-fought contest, Kim Kuk-chol’s header on 37 minutes appeared to have secured victory for the Koreans only for Japan captain Takumi Minamino to equalise with eight minutes remaining from the spot.
But with goalkeeper Cha Jong-hun then saving the decisive penalty from the same player in the shootout, three-time champions DPR Korea will now travel to Yangon ahead of Monday’s semi-finals, with An Ye-gun’s side also securing a return to the FIFA U-20 World Cup next year for their third appearance at the finals.
Both teams made just one change from their final group stage ties on Tuesday with Japan forward Ado Onaiwu getting his first start in place of Kohya Kitagawa, while Jon Kum-dong returned to DPR Korea’s backline after missing out against Oman and Iraq.
And it was the Koreans who almost opened the match in explosive fashion as Kim Yu-song forced his way into the penalty area in the second minute only to see his toe-poked effort blocked by a spread-eagled jumping block from Japan goalkeeper Kosuke Nakamura.
The danger was not averted, though, as the rebound fell to Jin Il-sok, but the forward’s low shot was stopped this time by a more orthodox low save from Nakamura, diving low to his right.
Japan’s riposte nearly resulted in the opener, however, as on 11 minutes Yosuke Ideguchi’s free-kick from 25-yards-out swerved around the DPR Korea wall and clattered the foot of the right-hand post with custodian Cha Jong-hun beaten.
Onaiwu then missed two good chances after being played in by first Shota Kaneko and later Takumi Minamino as Japan enjoyed the lion’s share of possession.
Nakamura was then called into action once again in spectacular style after the half-hour mark as he pulled off an outstanding reaction save from Kang Nam-gwon’s shot from just 10 yards out following a free-kick that was not dealt with by the Japan defence.
But the warning went unheeded and the subsequent corner caused panic again amongst the blue-clad ranks, with the ball eventually coming out to Kang on the right flank and the midfielder’s cross found Kim Kuk-chol at the back-post to head home.
Japan coach Masakazu Suzuki freshened up his front line at half-time in an attempt to restore parity with Kitagawa coming on to replace Onaiwu.
Despite the switch in attack, the Samurai Blue struggled to penetrate the Korean backline until the 72nd minute as Ideguchi’s free-kick found a leaping Kaneko who turned his header onto the post, with Minamino unable to reach the rebound as it rolled along the six-yard box.
But with eight minutes remaining, tricky winger Kaneko danced into the penalty area from the left-flank and had his feet taken out from under him as he looked to pull the trigger.
And Minamino duly punished the infraction in ruthless fashion, slamming the resulting penalty-kick past Cha into the bottom left-hand corner to draw the sides level.
The remaining minutes of regulation time, nor the additional half-hour of extra-time, could bring further changes to the score line and the match went to penalties.
The first eight spot-kicks were a veritable penalty-taking clinic with both sides tied 4-4 going into the decisive round.
But after Jo Sol-song blasted home their fifth kick to extend their perfect record, Minamino’s effort was saved by a flying save to his right from Cha to seal victory and break Japan hearts.