Gwon Kang Nam (Chobyong / North Korea)
Fast, skilful with the ball and attacking. Those are the highlights of the few reports available from the North Korean star midfielder. I saw him in the Asian qualifying final against Uzbekistan and showed good manners, but the North Koreans are a team committed to the collective rather than the individual so he was always very constrained tactically. It will be interesting to see him against more powerful opposition. 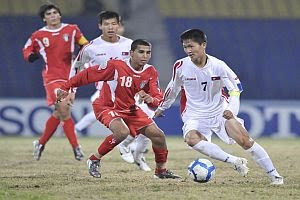 Pyongyang, January 14 (KCNA) — The DPRK in the New Year joint editorial set a goal to put the nation′s sports on a higher level.
The joint editorial stressed the need to raise a hot wind across the country to make Songun Korea widely known as a football and sports power.
The DPRK made signal successes in sports last year.
The DPRK men′s football teams placed first at the AFC Challenger Cup Tournament, U-19 Asian Soccer Championship, U-16 Asian Soccer Championship, 4-nation Soccer Tournament in Qatar and the International Tournament for the Vietnam Football Association Cup.
The DPRK women′s team won a birth to the 2011 Women′s World Cup.
DPRK players grabbed world and Asian titles in shooting, weight-lifting, boxing and various other events.

The DPRK is now channeling efforts into the development of football while positively pushing forward the drive to put sports on a popular and scientific basis and train reserve players.

Could the next Messi be in North Korea?

DOHA – North Korea may have tumbled out of the Asian Cup with just one point and having failed to score, but they have the hottest youth sides in the region and according to one scout the world's best new talents.

Representatives from top European clubs have flocked to the continental showpiece in the hope of picking out the next Hidetoshi Nakata, Park Ji-Sung or even a Lionel Messi.

Hedna Mustapha, a scout for top French side Monaco, says the isolated communist state of North Korea is a goldmine.

"North Korea have many talented players," he said. "I saw some of their youngsters at several international competitions but the biggest problem has always been inaccessibility to their officials.

"Even in Doha, there were quite a few players I would have liked to meet, but I couldn't," he was quoted as saying by Qatari media.

"They're still largely an unknown quantity and I feel they're the next big thing in world football."

In the face of severe financial constraints and crippling food shortages, the impoverished and secretive country has somehow managed to regularly churn out highly promising youth teams.

In October, Jong Il-Gwan, of North Korean side Rimyongsu, netted a hat-trick to inspire his country to a 3-2 victory over Australia in the under-19 version of the Asian Cup. It was the North's second regional title in four years.

A month later, their under-16 team emulated the feat, defeating hosts Uzbekistan 2-0 to take the regional title at that age group as well.

"North Korea have again proved that they are taking the development of youth teams very seriously, as they are becoming regular contenders for the titles of these championships," Asian football chief Mohamed bin Hammam said at the time.

After their capitulation at the Asian Cup – six months after the North made their first World Cup appearance since 1966 – coach Jo Tong-Sop said it was time to start bringing through the younger talent.

"Our under-20 team has good players technically and also in defence and midfield so we will try to combine the young players with the national team players," Jo said, also pledging to make the side more attacking in future.

Despite harsh restrictions on movements of its nationals, several of the current members of North Korea's senior team play abroad, including in Germany, Russia, Switzerland and Japan, though not for any top sides.

Experienced midfielder An Yong-Hak, who plays in Japan and was an ever-present at the World Cup, cautioned it might be too early to rely on the young players to carry the burden of expectation in football-mad North Korea.

"Of course, the older players who have been at the World Cup have more experience at international level and they have more knowledge and skills in football than our young players," the Japan-born An said.

"But even though our younger players are not able to perform at the highest level yet, they have tremendous potential and could become better players in the future."

He even went as far as to encourage his team-mates to head to great rival South Korea – with whom the North is still technically at war – to further their footballing careers in the top league there.

"After playing in the K-League for four years, I gained a lot of experience so I am sure that others would also benefit from playing there," he said.